One Man, One Life, 8 Million People...so many pencils!


Every Person In New York
I am trying to draw every person in New York. I will be drawing people everyday and posting as frequently as I can. It is possible that I will draw you without you knowing it. I draw in Subway stations and museums and restaurants and on street corners. I try not to be in the way when I am drawing or be too noticeable. Whenever I have a new batch of drawings I will post them on this blog. If you would like to increase the chances of a portrait of YOU appearing on this blog please email me (art@jasonpolan.com) a street corner or other public place that you will be standing at for a duration of two minutes (I will be on the corner of 14th street and 8th avenue on the North-east corner of the street from 2:42-2:44pm this Thursday wearing a bright yellow jacket and navy rubber boots, for example). Please give me more than a 24 hour warning and please make it a scenario that is not too difficult for you to accomplish (the corner outside of the store you work at during lunch time, or in front of a museum you were going to go to on a Saturday) because I may unfortunately miss you and do not want you to have to invest more than 2 minutes of your time in case I cannot make it. You may or may not see me drawing you during this time. If I do draw you, you will see yourself (or rather, a drawing that hopefully somewhat resembles you) on this blog that evening.

When the project is completed we will all have a get together.
http://everypersoninnewyork.blogspot.com/

Are You Looking For Banksy - That Mystery Man Of The Art World?

Runme.org is a software art repository, launched in January 2003. It is an open, moderated database to which people are welcome to submit projects they consider to be interesting examples of software art.

Software art is an intersection of two almost non-overlapping realms: software and art. It has a different meaning and aura in each. Software art gets its lifeblood and its techniques from living software culture and represents approaches and strategies similar to those used in the art world.
Software culture lives on the Internet and is often presented through special sites called software repositories. Art is traditionally presented in festivals and exhibitions.

Software art on the one hand brings software culture into the art field, but on the other hand it extends art beyond institutions...
http://www.runme.org/

This one should interest all the Shiny, Happy, People as well as Nes & Rat

Must Read Soccer has one aim: To bring you the best writing in English on football, wherever we find it, fresh almost daily, and without favor.

(Yes, the name is grossly utilitarian. The last thing the planet needs is another clever football blog name.)

The blog is edited by Bob Lalasz, a writer, editor and convert to the beautiful game. If you find great soccer writing, send it to him for inclusion on Must Read Soccer, and he will most assuredly thank you.
http://mustreadsoccer.com/

All the world loves a Wellington Boot!

Wellington boots are the best thing ever for splashing around in mud. Now a hi-tech wellie which charges a mobile phone has been launched for this summer's Glastonbury Festival. The Blog had to read the press release through a couple of times to be sure it wasn't a spoof:

"The Orange Power Wellies, created in collaboration with renewable energy experts GotWind, use a unique 'power generating sole' that converts heat from your feet into an electrical current ... Twelve hours of stomping through the Glastonbury Festival in your Orange Power Wellies will give you enough power to charge a mobile phone for one hour. To increase the length of time you can charge your phone for, simply hot step it to the dance tent because the hotter your feet get, the more energy you produce."

These guys have got to have a sense of humour to call themselves "GotWind." My fellow blogger Will Beacham, who covered Glasto for the Blog last year, will be taking the Orange Power Wellies for a test spin at this year's festival.
http://www.icis.com/blogs/icis-chemical ... glast.html

Amsterdam, 3/12/2010
The official celebration to mark the 50th anniversary of the Anne Frank House will be held in the Westerkerk church on Wednesday 28 April. A Virtual Wing of the Anne Frank House will be launched at the ceremony, with emphasis on the presentation of The Secret Annex Online.
The Secret Annex Online contains a great deal of information about Anne Frank and the Second World War. Every space contains informative films and texts about:

* the people in hiding;
* the people who helped them;
* daily life in the secret annex;
* the events in the outside world;
* objects contained in the space.

In The Secret Annex Online, visitors to the Anne Frank House in Amsterdam will find additional, in-depth materials that add a new dimension to their experience before, during and after their visit. Those who aren’t able to visit the Anne Frank House will be able to make use of its rich collection of information and items online: http://www.annefrank.org/secretannex

Stuff No One Told Me

Alex Noriega
Alex is an illustrator from Barcelona with poor spelling and grammar skills. 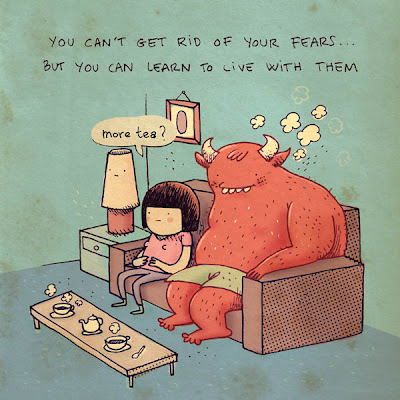 If you don't curb your enthusiasm...good things can happen!


CURB - The natural media company.
What we do
CURB offers a unique portfolio of sustainable media, with a proven track record of generating enormous awareness at minimal cost to the environment. Our natural experts use only sustainable earth elements to create everything from national advertising campaigns to astounding corporate art. Ultimately we just love to do cool things with nature.

To date our natural media solutions have been used for:

That'll be one for Pete then.

Can you sing or hum...
For Those in Peril on the Sea/ Eternal Father, Strong to Save?
Apparently everybody can! So, just in case you need a quiet refresher course...

Looking for a way to relax? Sounds good to me!


Nature Sounds
Use this free tool to play nature sounds on headphones while reading or meditating or just for fun.

In order for nature sounds to start playing choose a sound from drop-down box for one of the channels and drag the volume slider up. You can add more nature sounds to composition by choosing other sounds in other channels. It is also possible to add stereo effects by panning channels to the left or to the right.
http://naturesoundsfor.me/

Have you ever played scissors/paper/rock before? If so, here are a few hints to beat your opponent in the future:

How great would you feel if a real person called you every day to tell you, "You're Awesome!"?

With AwesomenessReminders, a real person will call you every day to tell you how much you rock. If you're not around, we will leave you a voicemail.

* Makes for a great gift - Give AwesomenessReminders to yourself, a friend, or your child
* Super Fun - Our calls will leave you beaming and ready to take on your day.
* Only $10/month - Cheaper than the cost of a movie ticket and way cheaper than the cost of a life coach. (Calls to countries other than USA and Canada cost $20/month)
http://www.awesomenessreminders.com/

iFixit is the free repair manual that you can edit.
Fixing the world, one piece of hardware at a time.

Free Repair Manuals We make it easy for you to fix things yourself with our online step-by-step repair guides, troubleshooting tips, and thriving community of repair technicians who want to help. Or, check out our teardowns — sneak-peeks inside the latest new gadgets.

Fix the Planet Repair is recycling! The best way to keep electronics out of landfills is to keep them working longer. Toxic electronic waste is a global problem that we are working to solve. Self repair saves you money and helps the environment!
http://www.ifixit.com/